Tet in Vietnam is a bit like Christmas, New Year and Thanksgiving all rolled into one.There is even a replacement for Santa Claus in the figure of The Kitchen God, Ong Tao who, after being privy to the families doings throughout the year returns to Heaven to make his report on the 23rd day of the 12th month, just before the week of Tet. As with Santa Claus, Father Christmas and St Nicholas, there are many versions of what adds up to the same story of this mythical figure who watches over us in a friendly way and repays us for our ‘goodness’ throughout the year.

In the folklore and mythology of Vietnam, the local people are descended from the dragon and a fairy symbolising the essential balance of Yin and Yang, masculine and feminine energies. The Dragon Dances  represent this legend with groups in local communities  dressing up in elaborate Dragon Dance costumes parading around the streets with drums and dancing along with a young woman who offers special attention to the children of the village.

After Ong Tao has left, in the week before Tet (Tat Nien), preparations start in earnest. Families visit the graves of parents and grandparents to tend the graves, burn incense and invoke the souls of the dead to prepare for their annual visit the family home. Cleaning of house and home begins in earnest as only the essentials will be done during the week of Tet.

Throughout the year, flowers and plants are important in Vietnam but never more so than at Tet. Flowering plants of all types are also bought in vast amounts with special markets set up in towns and cities to meet the demands.

But as in the Western culture of Christmas, every family has a tree.

Some families especially in the countryside set up a Tet tree called a ‘Cay Neu’. This is a bamboo pole stripped of most leaves except for a bunch at the very top. Talismanic objects are then hung to clang in the breeze to attract good spirits and repel evil ones. At the top, is placed a paper symbol of yin and yang, the principal forces of the universe. This is ceremoniously removed on the 7th day after Tet. 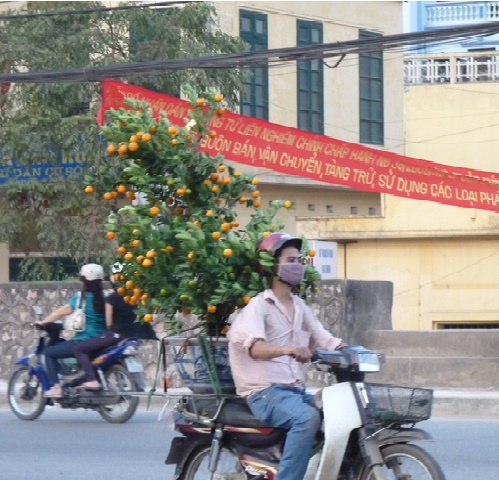 However, the majority of people in cities (especially northern cities)  buy a kumquat tree, the bigger the better. Throughout the streets and the countryside, bicycles of roving vendors sell flowers and trees all balancing precariously and impossibly on the vehicles.

In the south, the bright golden yellow branches of the mai apricot are seen everywhere.  In the north, the soft rose-colored dao peach flowers decorate homes and offices.

Pre Tet is the time for thorough sweeping, scrubbing and polishing. The whole house gets a thorough overall ready for the all important food preparation and to avoid having to do anything more than the essential basics during Tet.

As well as the regular stores and markets, new vendors pop up everywhere like mushrooms selling all the ingredients needed to produce the traditional food of Tet as well as selling finished products ready to eat. Prices increase but this is one time of the year when thriftiness is not considered (remind you again of Christmas?). And of course, as well as the traditional food of the season, food generally features highly on the agenda. 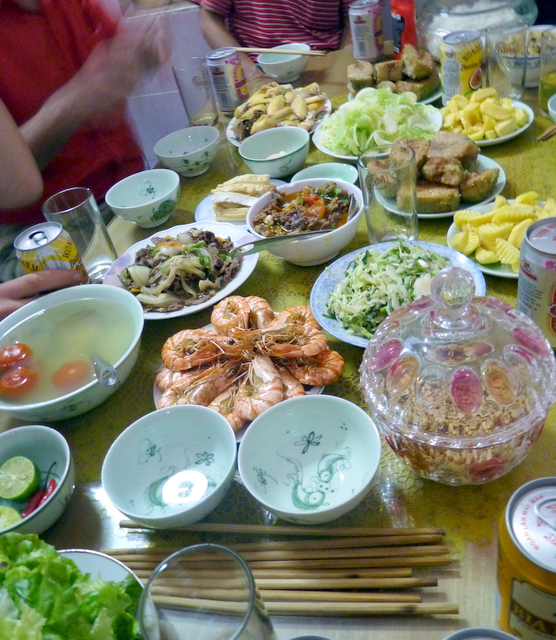 Traditional food:  Food during Tet is often served cold to reduce the amount of time spent in the kitchen. The most popular food is Banh chung and is found everywhere in Vietnam with slight variations in shape or content. Basically, they are patties made of shreds of fatty pork surrounded by a dense mixture of sticky rice and mashed green beans, wrapped in leaves and steamed.

Banh Ngot is a sweet version of the banh chung made without meat. Both can be served hot or cold.

Again, here we have similarities to the Western traditions of Christmas and Thanksgiving, Tet is a time for families to get together. The massive migration of young people from the provinces to the cities to get better education and jobs means that there is a lot of traveling to do pre Tet. Many come from small villages where their parents still live and work as subsistence farmers and this is the only time of the year when the family is able to reconvene. Unlike the West, there is no debate about who travels where. The children and their families always travel to the house of the parents of the husband as the first priority. Planes, trains and buses get booked up well in advance and are VERY busy with people sitting and sleeping in the aisles of buses and trains for journeys up to 15 hours and even more. And everyone traveling has bags full of presents (mostly food and flowers) for their esteemed parents and families. Despite the crush, the friendly, holiday mood is infectious and very special to be part of.

The dates of Tet are January/February is dictated by the first full moon of the year. Transportation can be challenging and the focus in most areas is on family rather than tourists.But of course, the benefit of being in Vietnam during Tet is that it offers an opportunity for experiencing some of the local traditions of this very special period.

The Eve of Tet

As midnight approaches on the eve of Tet, all eyes maintain a close look at clocks and watches when there is the ritual of Giao Thua (pronounced ‘zow tua’). Giao Thua is seen as a very sacred time as the old year gives way to the new. At midnight, families whisper prayers as bells ring and drums beat in temples. The word Giao means ‘to give’ while Thua means ‘to receive’ so the moment of midnight means a passing on or giving of life to the new year. 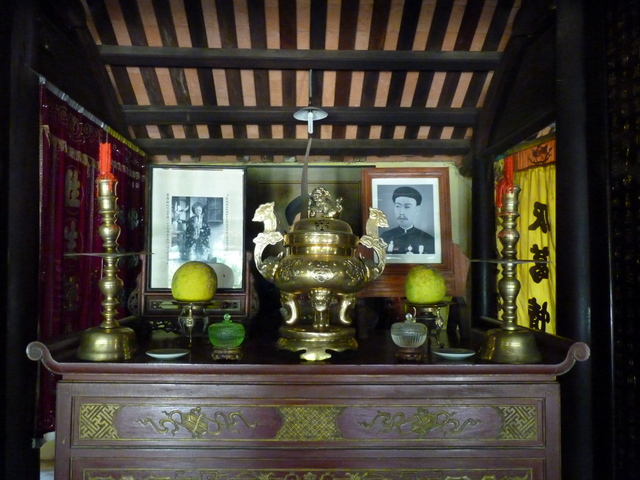 Giao Thua is followed by the ‘Gia Tien’ ritual when deceased relatives are invited to  visit for the days of Tet into the world of the living family. Paper money and other paper gifts are then burned in the courtyard and everyone focuses on the blowing away of the ashes. This is seen as the ancestors accepting the invitation to return.

Although this may sound a little ghoulish to the western ear, honoring ancestors is central to the spiritual lives of most Vietnamese people. Every home has an altar  to honor the ancestors of the family and is adorned twice monthly with flowers and fruit with parties held to mark the death date of important members of the family. Honouring the ancestors in this way at the turn of the year is a way of bringing lost ones into current awareness.

A more recently introduced tradition is the socialising on the eve of Tet with friends (especially for those who cannot spend time with the family) and the setting off of community fireworks. This is usually accompanied by a lot of noise from the banging of cans, singing and electronic firecrackers.

Day 1: The first morning of Tet is reserved for the nuclear family, that is, the husband’s household. Immediate family members get together with the husbands parents, or if the parents are dead, with the family of the elder brother.

Not to be forgotten, there is a special ritual for children called Mung Tuoi, or ‘well wishing on achievements during the coming year’. Very formally,  they thank their grandparents for their birth and upbringing. The grandparents respond by offering words of advice and wisdom and encourage them to study well and live in harmony. The children accept small gifts, usually money given in little red envelopes. This is often called ‘lucky money’. 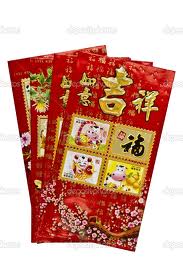 Children make verbal promises and adults make silent ones to improve their lives, habits and relationships much the same as the western tradition of new year’s resolutions. The family then make offerings to the altar table to welcome the ancestors on their return visit. This might include food, liquor, cigarettes, flowers and paper gold and silver, whatever the ancestors would have enjoyed in their lives. Three sticks of incense are lit and prayers offered while the names of up to 5 generations are whispered and invited to join the celebrations.

The family will then enjoy a meal typically made up of steamed chicken, bamboo shoot soup, banh chung and fresh fruits.

Day 2: The second day of Tet is for visiting the wife’s family and close friends. Some shops have opened and a few lottery stands are busy selling chances to people who feel lucky. Everyone is out on the street parading around in their new clothes.

Day 3: On the third day of Tet, the circle of connections becomes larger and is extended to the broader community outside the family by visits to teachers, bosses or revered physician. Fortune tellers are very busy at this time of year as are people who can interpret the first dream of the year.

The evening of the third day marks the departure of the ancestors by burning votive objects such as gold and silver, for them to take with them on their journey back to Heaven.

Now the connections spread even wider. The non-family member who will be the first visitor to the house is carefully chosen. The “first footer” is an auspicious guest who is considered to be good luck for the family for the coming year and is usually someone healthy, successful and prosperous. Some Vietnamese lock their doors to all chance visitors until after the visit of the chosen “first footer.”

4th Day: On the fourth day, careful attention is paid to the resumption of all activities with the first time in the New Year that a family leaves their home often being taken on the advice of fortune tellers. Banks, shops, offices reopen although everything might happen slower than normal.

15th Day: The fifteenth day of Tet (called Ram Thang Gieng), the first full moon, is considered the most auspicious day of the Buddhist year and there are ceremonies in all Buddhist temples. It is said that “paying homage to Buddha all year long is not as effective as praying on the 15th day of the first lunar month.”